Displayed here are the inside and back contents of:  Why Aren't Women Being Told?

Inside:  Why Aren't Women Being Told?

Breast cancer is the leading cancer in women with an estimated 203,500 American women being diagnosed with invasive breast cancer and 39,600 women dying from breast disease in 2002, yet women are not being told of the connection between abortion and breast cancer.

Not all women who have breast cancer have had an abortion, but it has been determined to be the most preventable cause of breast cancer. Many of the risk factors can be controlled by the choices women make. Choosing between abortion or childbirth can influence breast cancer risk. An abortion during high levels of estrogen starting in early pregnancy can predispose a woman to getting breast cancer. Prolonged use of contraceptives/abortifacients, especially before a full term pregnancy, can also increase the risk.

"Since 1998, cases have been commenced which have also claimed the additional failure to warn of an increased risk of breast cancer caused by abortion. Recently one of those cases has been settled for an undisclosed amount. This is believed to be the first case of its kind in the world. Although the woman had not developed breast cancer, she nevertheless received a significant sum."

Most of the known risk factors for breast cancer involve some form of over-exposure to the female sex hormone, estrogen. Estrogen is known to be a growth promoter of both normal and abnormal breast tissue and is, therefore, known as a secondary carcinogen or a tumor promoter.

In a normal pregnancy, the mother’s ovaries begin producing extra estrogen within a few days after conception. The level of estrogen in her blood rises by 2000% by the end of the first trimester - to a level more than six times higher than it ever gets in the non-pregnant state.

During the first and second trimesters, her breasts enlarge because a hormone called estradiol, a type of estrogen, causes both normal and pre-cancerous breast cells to multiply.

If the pregnancy is aborted, the woman is left with more undifferentiated - and therefore cancer vulnerable - cells than she had before she was pregnant. On the other hand, a full term pregnancy leaves her with more milk-producing differentiated cells, which means that the mother has fewer cancer-vulnerable cells in her breasts than she did before the pregnancy. That is why a full-term pregnancy lowers the risk of breast cancer later in life.

In contrast, most miscarriages do not raise breast cancer risk because these pregnancies generate insufficient quantities of estrogen. This occurs because miscarriages are precipitated by a decline in the production of progesterone from which estrogen is made.

"Approximately 1.5 million abortions are performed each year in the United States, making the prospect of increased breast cancer cases a health care time-bomb."

Back:  Why Aren't Women Being Told?

Are You At Risk?

Never having given birth or not giving birth until after age 30?

A pregnancy, especially a first pregnancy, which resulted in abortion?

Use of the "Pill" before a first full-term pregnancy or for 4 or more years?

Family history of breast cancer in first degree relative (mother, daughter or sister)?  Risk is greater if relatives had cancer in both breasts and if it occurred before menopause.

Age: The majority of all breast cancer cases are in women over 50.

Early onset of menstrual periods (before age 12) or late onset of menopause (after age 55)?

"Abortion is not the most common cause of breast cancer, but because it is a matter of choice, it is an avoidable risk." 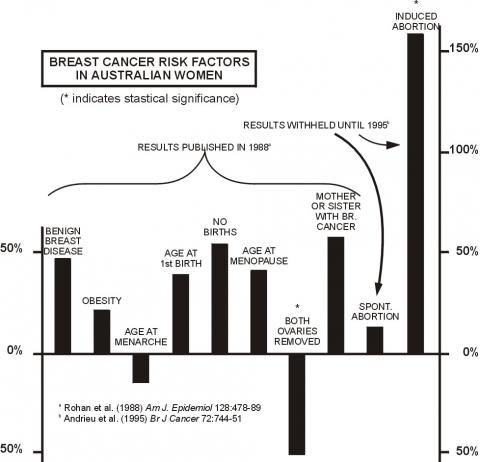 The Coalition on Abortion/Breast Cancer is a women’s organization founded by Karen Malec to protect the health and save the lives of women by educating and providing information on abortion as a risk factor for breast cancer.