Researcher Brent Rooney recently brought to our attention a letter he sent to the Israeli Medical Association Journal. His letter, "Pregnancy-associated breast cancer and the Nuremberg Code," was published in January 2009. We are sharing that letter with you (below).

The biological reason for the protective effect of childbearing is simple. Nearly all of the childless woman's breast lobules are cancer-susceptible Type 1 and 2 lobules where 97% of all breast cancers are known to arise. An increase in estrogen (a cancer-causing hormone) stimulates considerable breast growth by causing the lobules to multiply, so in the first months of a normal pregnancy, she grows more places in her breasts for cancers to start.

Conversely, experts agree that the older a woman is when she has her FFTP, the greater her breast cancer risk is. The biological reason is that her cancer-susceptible Type 1 and 2 breast lobules are exposed to increased levels of estrogen during every menstrual cycle, especially immediately before ovulation. The more menstrual cycles she has during her reproductive life (especially before FFTP when nearly all of her lobules are cancer-susceptible), the more estrogen she's exposed to, and the greater her breast cancer risk is.

For women who delay a FFTP until after age 25, there is a slight, short-term risk of breast cancer that disappears within 15 years after childbirth. In its booklet, "Breast Cancer Risks and Prevention," the Breast Cancer Prevention Institute explains the risk in this way:

"A woman may become pregnant after a cancer cell has already formed in her breast. That cancer cell may have been dormant for many years and not growing. Early in pregnancy, soon after conception, and even before implantation, estrogen levels rise. This increased estrogen level may stimulate the dormant cancer cell to grow until there is a clinically detectable cancer. This accounts for the slight and temporary increase in the risk of breast cancer in the post-partum woman over 25 years old. However, overall, the long term effect of pregnancy is reduction of breast cancer risk in the mother, regardless of her age when pregnant.

"If a woman does develop breast cancer while she is pregnant, her greatest chance for survival is if she is able to carry the pregnancy to full term. HCG (human chorionic gonadotropin), which is elevated during pregnancy, causes the ovary to produce a turmor suppressing protein called inhibin. HCG is also known to cause breast cancers to regress. In studies of women with breast cancer occurring during pregnancy, the only long-term survivors were women who did not undergo an induced abortion, but instead, gave birth or had a miscarriage. Breast cancer may be treated without harm to the baby, even when the mother is given chemotherapy after the first 8 weeks of pregnancy."

Our opponents attempt to confuse the public about the abortion-breast cancer link by pointing to a transient increase in risk associated with childbirth. Yet they fail to inform women that the risk exists only for those who delay FFTP until after age 25 and that the long-term risk of breast cancer for women with any children is lower than it is for childless women.

Read Brent Rooney's letter by clicking on the link or image below. 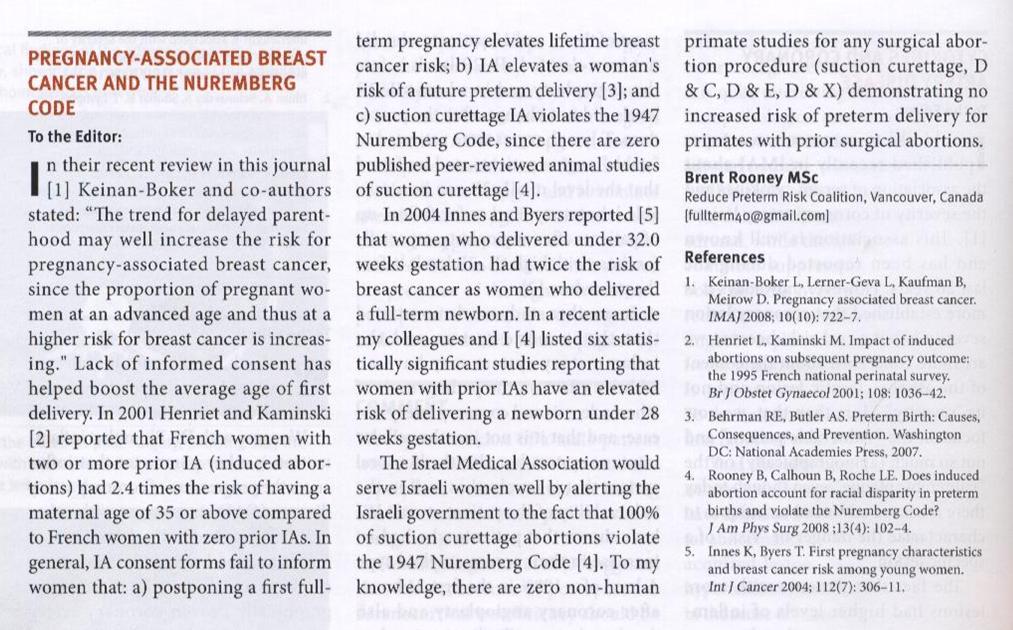