Estrogen is a normal female hormone made in your ovaries and in your fat (adipose) tissue.

Estrogen is also recognized as a carcinogen in your body for certain types of cancer including breast cancer.

Estrogen stimulates your breast tissue to increase cell divisions (mitosis). This sometimes results in cancers due to errors in cell division (mutations). Other substances (carcinogens) or exposures (e.g., high dose radiation) can also result in cancer.

Below is an illustration of that effect:

John Kindley, "The Fit Between the Elements for an Informed Consent Cause of Action and the Scientific Evidence Linking Induced Abortion with Increased Breast Cancer Risk," 1998 Wisconsin Law Review, No. 1595 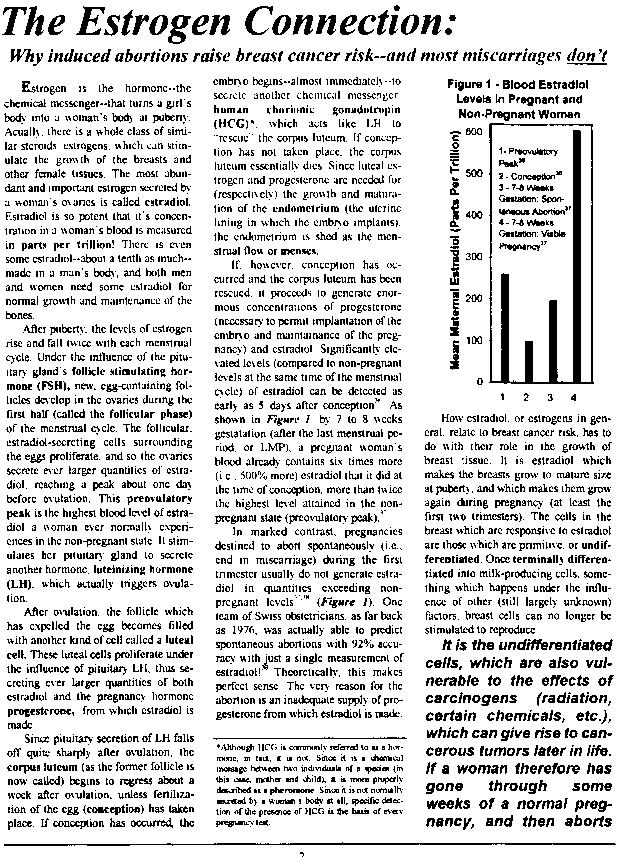 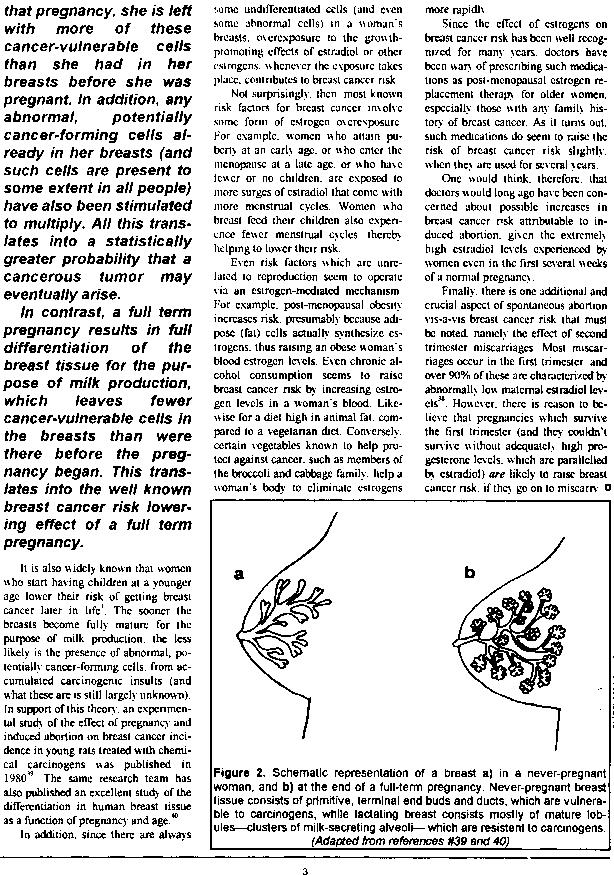 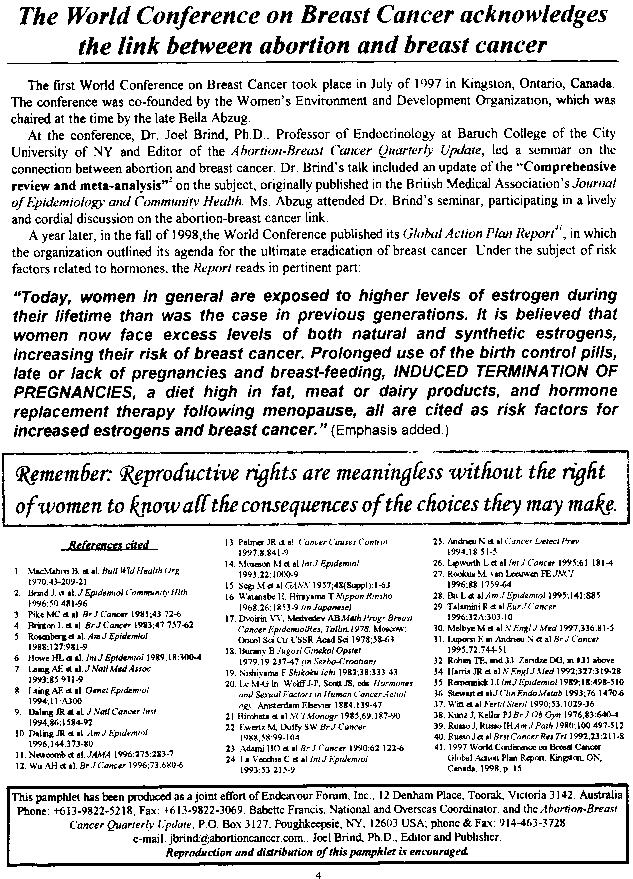 The purpose of this letter is to remind you that Cytotec administration by any route is contraindicated in women who are pregnant because it can cause abortion. Cytotec is not approved for the induction of labor or abortion.

The following is a letter published on September 15, 2000 in the Daily Herald located in Arlington Heights, IL. The letter was edited by the newspaper. (Please note that the Daily Herald omitted the fact that the two questions appearing in the second and third paragraphs were addressed to Steve Trombley, local president of Planned Parenthood.)

Planned Parenthood's local president, Steve Trombley, argues that RU-486, an abortifacient, has not received FDA approval because of "anti-choice politics."

What Commentators Say About the Cover-Up

"If a scientist discovered a risk factor that increases the chance of breast cancer by 30 percent, you’d have thought it would have spurred huge headlines and impassioned demands for action. With the exception of AIDS, no other health issue has been as politicized as breast cancer. Yet as scientists zero in on what one called the single most avoidable risk factor for breast cancer, barely a peep has been heard for more research, more funds or more information. That’s because the risk is abortion" (Dennis Byrne, "Abortion, Ideology and Breast Cancer," Chicago Sun-Times, July 2, 1997, p. 33).

The Cover-Up: Critics Blow Smoke to Confuse the Public

What commentators say about the cover-up

Whenever the abortion-breast cancer research receives a little press, the abortion industry and their supporters put their media machines into gear and invariably create a smokescreen to confuse the public and persuade women that abortion is, in fact, safe.  Some members of the press willingly cooperate in this deception.  Others do so unwittingly.

Displayed here are the inside and back contents of:  Why Aren't Women Being Told?

Inside:  Why Aren't Women Being Told?

Breast cancer is the leading cancer in women with an estimated 203,500 American women being diagnosed with invasive breast cancer and 39,600 women dying from breast disease in 2002, yet women are not being told of the connection between abortion and breast cancer.

Not all women who have breast cancer have had an abortion, but it has been determined to be the most preventable cause of breast cancer. Many of the risk factors can be controlled by the choices women make. Choosing between abortion or childbirth can influence breast cancer risk. An abortion during high levels of estrogen starting in early pregnancy can predispose a woman to getting breast cancer. Prolonged use of contraceptives/abortifacients, especially before a full term pregnancy, can also increase the risk.

ABC a "health care time-bomb" On June 8 of this year, a floor debate erupted in the US Congress about the ABC link in the context of a debate on an amendment to the Food and Drug Administration funding bill. (See cover story, Spring 1999 ABCQ Update). The exchange involved over half a dozen Congressmen, with five speaking in favor of the need for the public to know about the evidence of the ABC link.

None spoke more passionately than Dr. Dave Weldon of Florida, who said (in part):

On December 16, a young pro-life sidewalk counselor at an abortion clinic in Fargo, ND, Amy Jo Mattson, filed a lawsuit against the Red River Women’s clinic, one of two abortion clinics in Fargo. The basis of the lawsuit, filed in Cass County District Court, is the allegation that the abortion clinic hands potential clients a brochure which violates the state’s truth-in-advertising law.

The brochure reads in pertinent part: "Anti-abortion activists claim that having an abortion increases the risk of developing breast cancer and endangers future childbearing. None of these claims are supported by medical research or established medical organizations" (boldface and underlining original).

This obviously false claim was apparently abstracted from the website of the National Abortion Federation, to whom inquiries were referred by Tammi Kromenaker, the director of the clinic. The NAF’s website does indeed disparage the ABC link (just as the NCI’s website does), but it also acknowledges that the "well done" Daling study did report 50% increased risk of breast cancer in women who had had an abortion.

Sometime between June and September, what I had termed the NCI’s "brazen public disinformation campaign" (ABCQ Update, Summer 1998) got a little less brazen. At issue is the worldwide web page which the NCI devotes to abortion and breast cancer, under the heading: "Cancer Facts—Risk Factors". The same material is also distributed by the NCI in hard copy form.

The particular version which was deconstructed in detail in this journal (Summer 1998) was posted shortly after the publication of the Danish study by Melbye et al.1 in the influential New England Journal of Medicine in early 1997. Its recent modification came only after pressure from the US Congress, in the form of tough questions asked at subcommittee hearings, a detailed interrogatory follow-up letter from the Chairman of the Commerce Committee to the NCI Director (ABCQ Update, Winter 1998-99) and an open floor debate in the Congress this past June (ABCQ Update, Spring 1999).